Cambodia has to be one my favorite countries, up there with South Africa and Hong Kong. The countries beautiful, the people friendly and I was traveling with some really good friends. We packed in so much that I'm going to have to split this post into two. So, where did I leave you last? Ah yes, another border crossing between Thailand and Cambodia.

The border between Thailand and Cambodia is one of the more dodgy ones in the world. Before I embarked I read up a bit on it, so I was well prepared for the process and any eventual scams. Not many westerners take this route, so we were in for a bit of an adventure. We arrived at a border town by bus, and then took a Tuk-Tuk to the actual border. Getting our exit stamp was easy enough, but the process the other side in Cambodia is slightly more tricky. We spotted the first scam, 'special visas' from an non-governmental agent, and found the actual office. Then we walked over the bridge separating the two countries.

Immediately you can see a difference. Wooden wagons transporting food, tons of scooters, and a women eating cockroaches. To be honest, I had no idea what to expect. If I was a cambodian, wanting a laugh, I'd stand by the border eating lots of bugs too; just to see the look on foreigners faces. Apart from us, the people crossing were mainly Thais wanting to do a bit of gambling in Cambodia. The sun was quickly closing in, and I wondered if we'd get to Siem Reap by time.

I took a video, but am having trouble embedding it. You can find it on the Picasa Web Album.

We found an un-official taxi (a bit cheaper than the government ones), and, although our driver didn't speak any English, managed to convey we wanted to go to Siem Reap. The drive is a few hours, so we go out the iPod speakers, turned up the volume, and drank a few beers. Of course, half way there some of the party needed the loo. I tried to convey this to the driver, making all sorts of pshing sounds. He nodded his head, smiled and turned on the windscreen cleaner. With some slightly more physical explanations, he got the message and we turned off the road for a break.

Siem Reap is a lovely place. Fairly touristy, but nothing like Thailand. There were a bunch of good restaurants and cafes. I can recommend the Blue Pumpkin, my favorite bakery, and Central Cafe. The night life is pretty good too, with lots of cool bars and a few clubs. The drawback to the town is that every minute you're asked again and again if want a Tuk-Tuk. In fact, next time I go to Asia I'll going to make a T-shirt with "I don't want a Tuk-Tuk" stenciled over it. Throughout Siem Reap are fish tanks (Dr Fish), which you could put your feet in, and have fish nibble your toes - quite an odd feeling!

However, a big reason that Siem Reap exists is for Angkor Wat, a huge complex of nearby temples. With in mind, we found a driver (called Da) for the day, and zoomed off on a Tuk-Tuk. The first glimpse you get of the temples is mind blowing. Angkor Wat, probably the most well maintained temple, is accessed over a bridge. I'm afraid, most of the rest of this post will be photos, as it was such a stunning area. 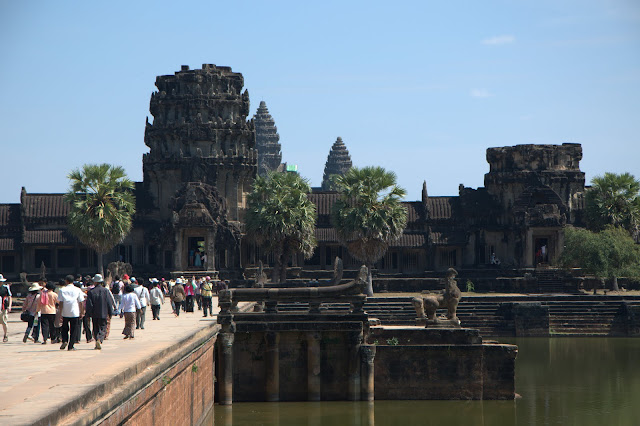 Here's a movie I made when crossing over the bridge. 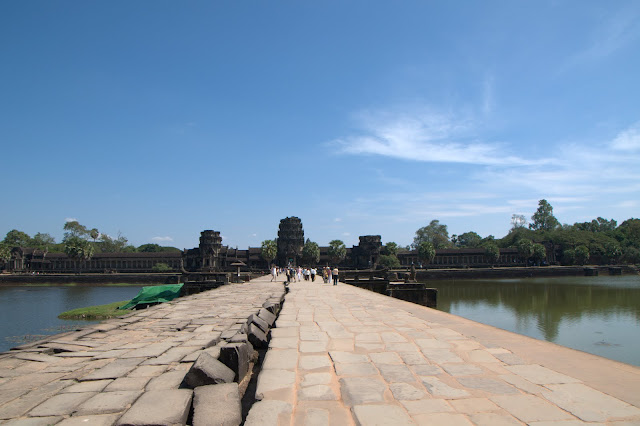 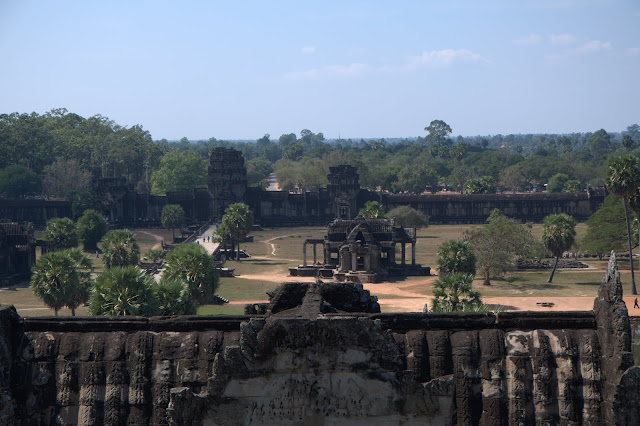 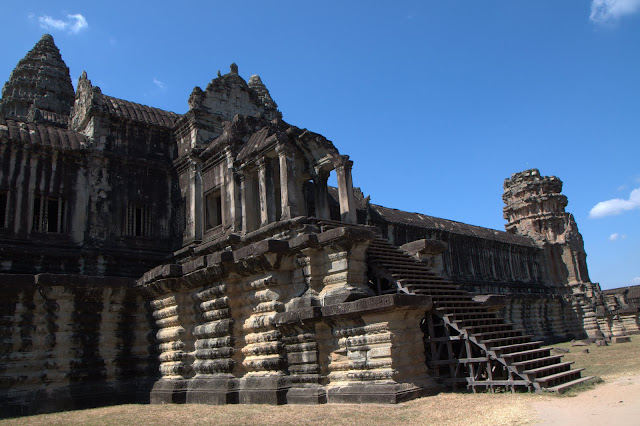 Some of the older temples were a bit more ruined, but just as spectacular. 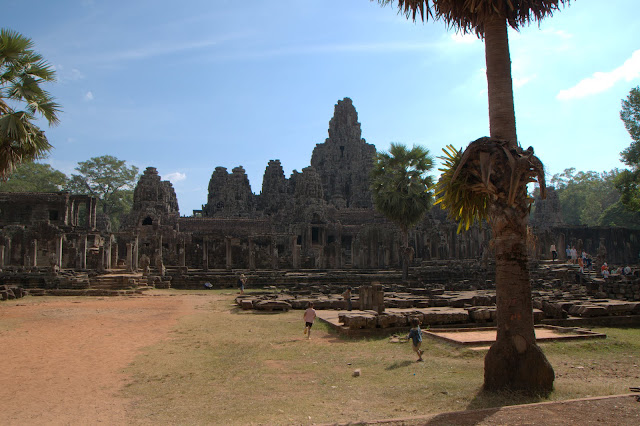 The guy taking this photo seemed to think the camera would explode when he pressed the shutter. He would jump everytime he heard a click, which is why it's a bit blurry. On the left is Alvaro, then Marta, David and me. 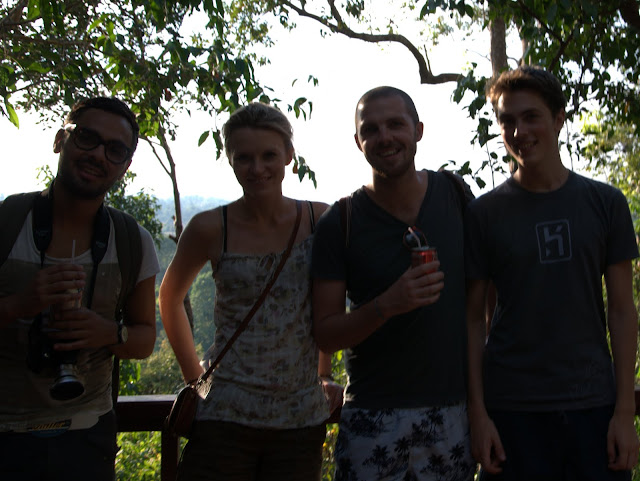 I took this photo accidentally, but it gives you a good idea of their skill with masonry. Can you believe it, they didn't use cement. Instead they cut the stones so well they just hung together. 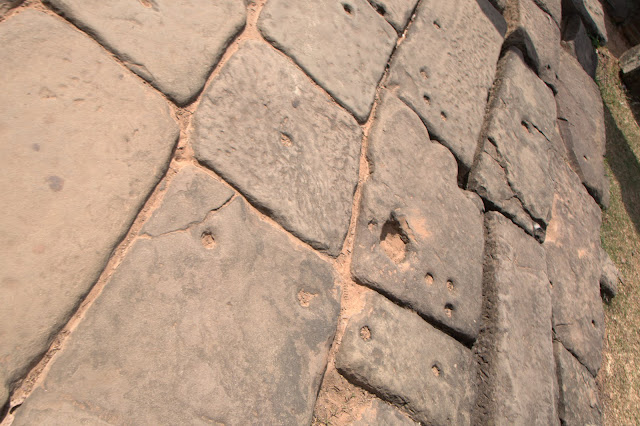 Just incredible cavings in the stone. I'd give anything to go back in time and see this place in its former glory. It's truly one of the wonders of the world. 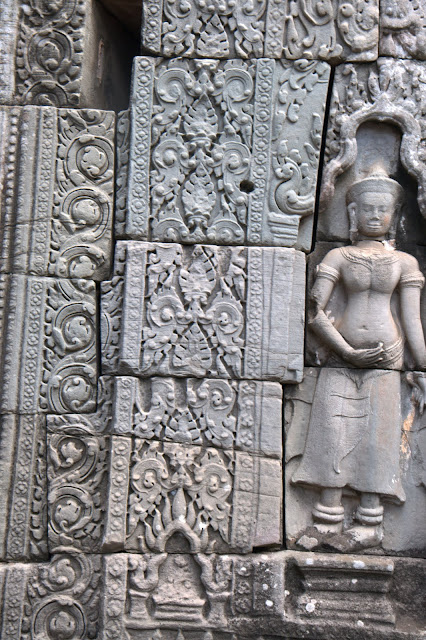 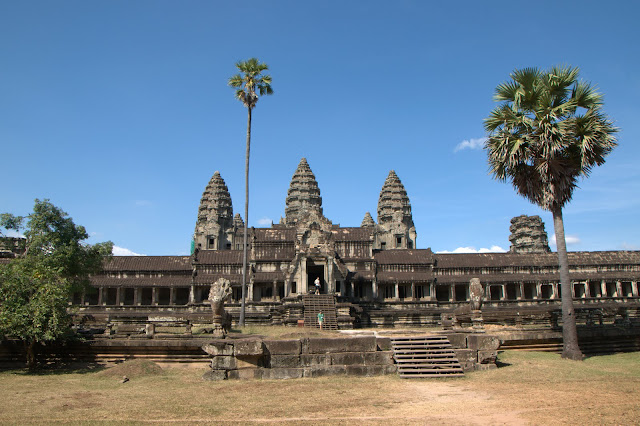 As we sat here looking across the lake, a few local girls came up to us selling drinks and beads. Their average age was about 12, but what was astounding was their mastery of foreign languages. One girl could conversationally speak English, French, German, Spanish and even Mandarin. When we asked them how they knew all those languages, the reply was always the same: "From tourists". 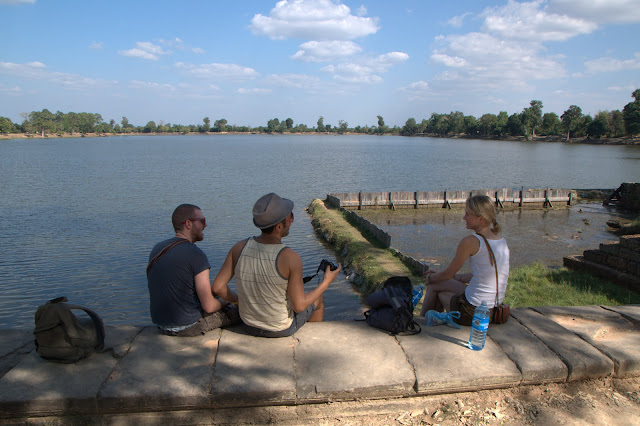 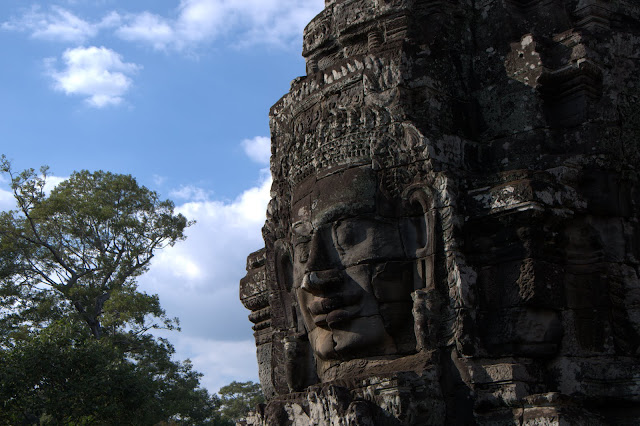 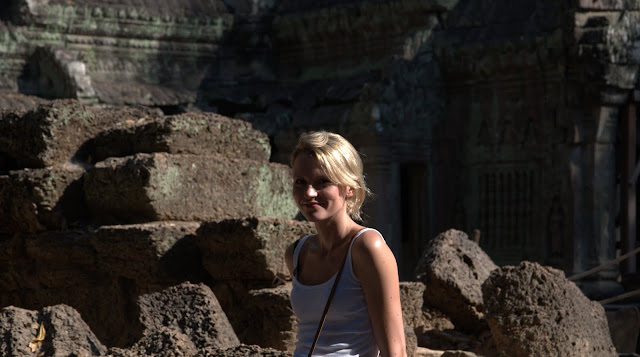 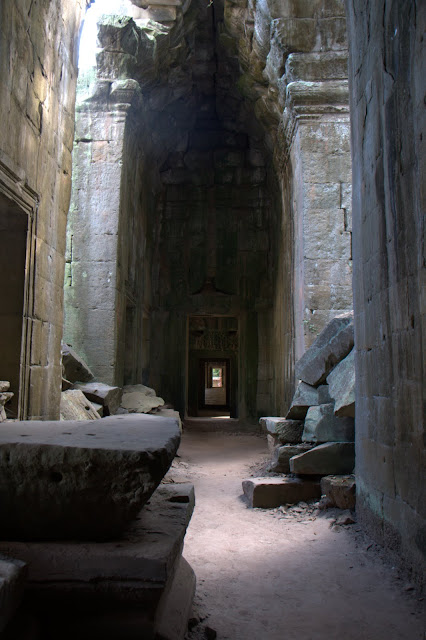 One of the reasons I went to Angkor Wat, and took this trip for that matter, was because of some of the amazing photos I'd seen on the Stuck in Customs site. Although, I'm not nearly as talented as Trey I feel fortunate to visited some of the same places. I heard about an older temple with some amazing trees growing through the stones. This photo gives you some indication of their size. 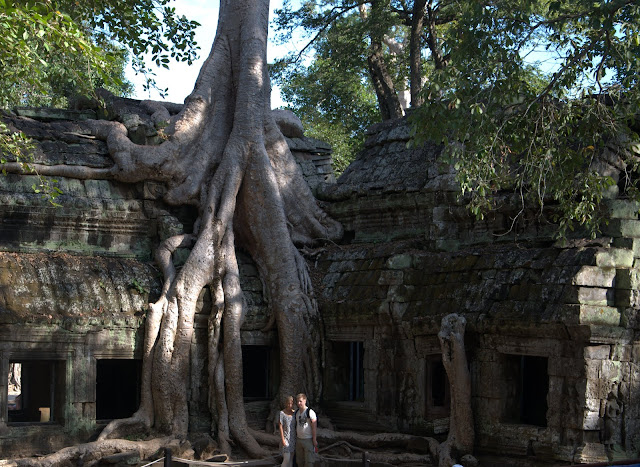 Well, that was Angkor Wat. I feel so fortunate to have been able to see it.

After three or so days, we headed to Cambodia's capital, the tricky to spell Phnom Penh. There, the adventure continues, but for now, adios!

For the full photos, check out the Picasa web album.